Monday Moment #72: a writing prompt for your work-in-progress

(If you’ve already read this then skip past all the italicized blah-di-blah and start writing.) Monday Moments are writing prompts for your work-in-progress. They are questions that come from my experiences and are my favorite way to find out more about my characters. I find I learn a lot. Some of it I use. Some of it I don’t. But I always, always get to know my character(s) better just by answering the question. I hope you do too. )
Hey all! I hope you're weekend was full of shine. For those of us in the Seattle area, at least we saw a bit of it coming from the sky on Saturday. It hasn't happened much lately.
I mentioned in my last post that I would shine in a whole different way on Friday and Saturday. I was right. I glistened with sweat over and over and over again. But I also had an unexpected kind of shine that was wonderful and fun.
It was a truly fantastic couple of days spent on another of my passions: group fitness. I had the most wonderful opportunity to take a BODYSTEP Advanced Instructor Module with Mark Nu'u who is the program director (he came all the way from New Zealand). In other words, he is King BODYSTEP! 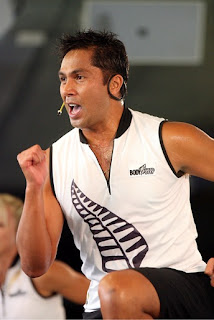 That's him!
He and another master teacher, Amanda, spent Friday whipping 20 of us into even stronger instructors. It's was an amazing, shiny day.
Day two was the Les Mills Super Quarterly; a day where the master teachers instruct the latest program releases to instructors from around region (there are eight programs). As instructors, we were able to take six classes. And whoa! No easy task (especially after 9 hours of step work the day prior).
That said, a Super Quarterly is a bit like attending a rock concert, workout style. It's an amazing show. The highlight of the day was the second class offered, which was BODYSTEP, since we had spent the day with Mark and Amanda the day before AND because it's the 20th anniversary of the program and the 80th release. The theme? You guess it. The 80s. So during the class they held an 80s contest. The winner would get to be on stage with Mark and Amanda during track 7 and their day refunded. Go for it, right?
Before leaving, I pulled together a few things and then I added a few extras another team member, T.J., brought, transforming into Madonna. T.J. rocked the perfect 80s dancer look (I wish you could see her blue eyeshadow). We were determined that one of us would get on stage. 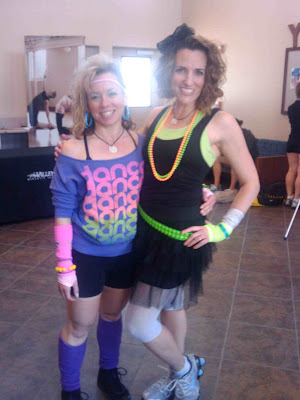 First, we jockeyed for position and made sure, that out of 125 steppers, we were front and center. It was a blast. Being right in front of Mark and Amanda, they were able to give us shout outs after spending so much time with them the day before. Then as we stepped our little hearts out, during the beginning of track 6, someone runs up to me and say, "We need you. Come with me."
Wheeeee! I knew what that meant. OMG. OMG. OMG. I was the winner. Not only that, but they chose three of us: the Madonna look, a guy rockin' Guns-n-Roses style, and 80s aerobics-look that featured a butt-floss leo (remember those?)! Minutes later I was on stage with Mark and Amanda, under the lights, looking out at a sea of stepper. My mini-rock-star moment and I felt shiny and good! 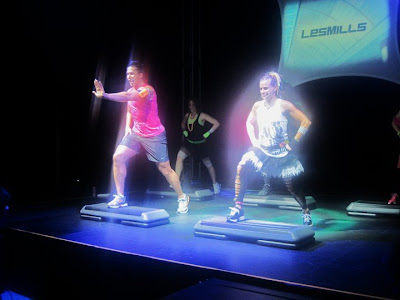 That's me back there behind Mark. Look at their shine!
And here I am with Mark and Amanda are after the class. 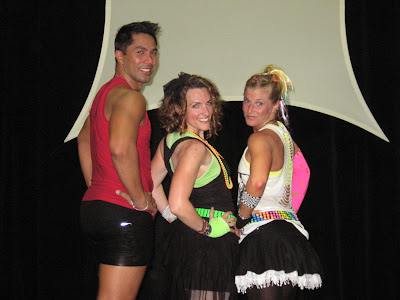 Do I look shiny? I felt shiny in lots of ways.
I guess I was literally shining on stage too. It really is rock-star-like. The lights are low, the music's loud, the air is fogged, there's colored lights flashing, and a black light. I guess my gloves, necklaces, and belt were all glowing up there.
Many pictures were taken, but not with my camera. A friend capture the one action shot. I'm told Les Mills got a lot of great shots and will be sending them to me. *clap, clap, clap* I'll share them when I get them.
Has your character ever experienced a rock star moment or dreamed of having one?
Posted by Cuppa Jolie at 5:32 AM

This is so exciting! I mean, totally awesome. Like, congratulations!

Great to hear you had an awesome time at the Super Quarterly! I work in the communications team at Les Mills International in New Zealand and would love to feature some of your feedback (and a photo or two) on the KIA KAHA section of lesmills.com. If you could contact me on emmah@lesmills.com that would be great. Cheers,
Emma Hogan

Too cool, Emma! What a treat to have you find me here. I'll be in touch!

AWESOME to have you shining in sooooo many ways up on stage with us, Jolie! thank you for all of your 80's style and flair! And those pushups on your toes...you go guuurrrrrllllllllllll! Big hugs and luvs to you and your amazing BODYSTEP(R)team! Turn it Up and make a difference to your members experience, health and life. Remember...who's the BODYSTEP brand? :)

Keep up all of the amazing work! You are a beautiful person inside and out!

Congrats! (And you look like you barely broke a sweat!)

This is so super cool!! (As a writer, it seems like I should have something more eloquent to say than "super cool," but that's what leaps to mind. =))

Congratulations! And I love your outfit. Nice work!