Monday Moment #102: a writing prompt for your work-in-progress

As embarrassing as it is, I'm calling myself out right now. (Well, I actually already called myself out of Facebook, but in case you missed it there, here it is. This time with more detail.)
Several nights ago I was at the gym. I headed out to the dark parking lot, keys in hand. Just like always I pressed the unlock button on my key fob, but there was no click of the car door unlocking. I tried again and again. No luck. It had been acting up lately, so it didn't surprise me. (Do these things take batteries? I'm thinking it needs batteries.)
No problem though. I have one of those nifty number code things on the door. For years I've been typing in that code to unlock the door for one reason or another. Uh...wait...what was that code again? I went completely, totally, ridiculously blank. But I gave it try, hoping feel alone would guide me.

Okay. Time to regroup. I headed back into the gym to rifle through my wallet for the card that has the code on it. I was pretty sure I had it in there. Or did I get rid of it? Looking...looking...looking...and NOTHING.

Back out to the car.

Try again. I punched button after button after button until the lit-up number keys started flashing and so did the lights inside the car. I'm pretty sure the car though I was trying to break in at this point and wouldn't let me in even if I did get the code correct.

I know. Call my husband. Maybe he remembers the code.


I took out my phone and started to dial. One ring. Two... 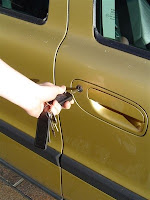 That's when it hit me. I left the gym with keys in my hand. Keys typically start a car, but they also UNLOCK doors. The more frightening things was (yes...calling myself out) I wondered if there was even a keyhole in the car door. I certainly had never used it. But, sure enough there was the keyhole. And the key fit. In fact, it even turned and...
TA-DA
Car unlocked.
How novel. A key that unlocks a door.
*hangs head in shame*

What has your character become so used to doing that when an element changes they don't know what to do?
Posted by Cuppa Jolie at 5:27 AM

Everyone is entitled to (indeed... NEEDS) a "DUH" moment now and again. Keeps us humble and attentive.

This is so darned funny, Jolie! I love it.

I was once at a fourth-of-July bbq with a group of strapping men. Parking was tight, as we were at a house with a view of the fireworks, and everyone was driving large SUV-type cars. Right in front was someone's boat on a trailer, taking a couple of spots.

Some of the guys got to talking about how they might be able to move the trailer and the boat, if they all pulled together. You could see the muscles flexing under their shirts and smell the testosterone.

I'll never forget the way their faces looked when they realized that yes, yes indeed, they had bought these big cars for exactly that reason...

I did the same thing one time and was so frustrated with my car, the key, etc., and was just about to run screaming to the nearest phone (this was pre-cellphone) to call a tow truck when I saw it ... the box of Kleenex on the back window ledge.

And like a ton of bricks falling on my head I realized ...

This was not my car. But it did belong to the guy starting to cross the street. I looked as casual as possible as I scurried off to find my almost-identical car.

Okay, I love this story! (it totally made me laugh - with you, not at you!) It's moments like this, when we're willing to be honest and are brave enough look silly, that make us love those characters - and your sharing this story just makes us love you all the more!
Namaste and a Hug,
Lee

I thought this story sounded familiar. But happy to read the extended version! So funny!