Monday Moment #130: a writing prompt for your work-in-progress

Here's a question for you: How do you turn one lizard into two guinea pigs?
What? You find that question strange? Oh...or you think it's some kind of joke with a punch line, maybe?
No...it's a little something my children made happen, with a little help from their dad.

So, here goes. This is how you do it. (Warning: you may not want your children to read this post.)

One morning, not long after my husband had left for work, I get a call from him saying, "Open the garage and tell the kids to meet me outside."


This can't be good. You're with me, right? Warning bells.
Sure enough, my hubby arrives with a shoe box which contains a lizard, a lizard that didn't want to take no for an answer (he couldn't get it to leave his van or the road). I don't have to tell you how my children reacted to seeing this clingy lizard, except to say it was the exact opposite of my reaction. I wasn't the one who wanted to keep it.
I had all sorts of arguments for why we shouldn't: we needed to know what it was; if it was safe for the lizard; if we could provide what it need; and oh...the fact that it eats LIVE crickets.
The kids got right to work. Don't let your children tell you they can't research online because mine learned right quick that the lizard, the one which hitched a ride on their dad's bumper, was a Northwest Alligator Lizard. They knew what it ate and what it needed to be kept as a pet. Next step? Call the local pet store to see if they had the supplies needed to keep the lizard. And, even more important, to ask if it's okay to keep it? Maybe it would just be cruel to the little guy.
Pet store fail! They said, "Hey. No problem. We've got what you need. Come on down. Oh...and you'll probably want to get a cricket habitat so you don't have to continually buy crickets."
Oh, joy!
Because I was so excited about this lizard, I thought it was only fair for the girls to fork over their own money for half the costs (and they agreed...I should have requested all the costs). Of course as we loaded up on lizardy needs at Pet Town, the girls checked out the mice, hamsters, and gerbils. Then after the we received the total and handed over $70 (FOR A LIZARD!) my youngest said, "We should've just got the mouse. It was only a couple bucks."
EEEEERCH! Uh...what? Did we not just spend all this time and money for a lizard?
As we loaded up in the car, realizing after all of that we'd actually forgotten to get crickets and meal worms for the lizard, we had a conversation. I had to ask, "Do you really want a lizard? Or if you had a choice would you prefer to have another rodent-pet (we've had gerbils in the past)."
The answer was fast and clear...they wanted something warm-blooded again. (Frankly, I was open to this because it meant no more lizard.)
In we went, stating our buyer's remorse to the nice girl behind the counter. We were able to return all the lizard supplies and now make a decision about what furry pet to bring home: The cute little white mouse with brown spots that was only $2? Or, that fat hamster...he's awfully cute. Another gerbil? Oh, but don't forget the nice girl behind the counter told us how incredibly sweet the female guinea pig was.
Guinea Pig!?!

Seriously, those things are huge. And not $2.

But, okay...let's hold the guinea pig just to check it out. That little black guinea pig snuggled into the girls' chests and made sweet squeaky sounds, and then it was my turn to hold her.

Really? Why didn't anyone tell me that guinea pigs are so sweet. Not all squirmy and bitey like hamsters and gerbils. Well, there was no leaving without that pig. And on the way home, she was given her name: Charlotte.
And after the girls' Grandma and Papa fell in love with Charlotte, too, and the girls learned that guinea pigs are herd animals and are happier with a friend, Grandma decided she wanted to buy the girls a friend for their new addition. Welcome, Clarabelle.

And what happened to the lizard that actually was given the name Fred? Well, we released him into the woods next to our house. And, believe it or not, not too many days later a very familiar looking lizard was under my hubby's van. 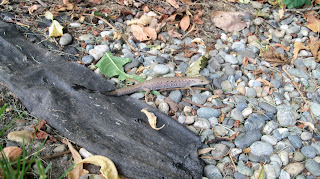 And that's how you turn one lizard into two guinea pigs.
Kids can be quite good at manipulating situations to get what they want. (Or at least mine are really good at doing it with me.)

What has your character been able to talk a grown up into doing or getting or saying?
Posted by Cuppa Jolie at 5:35 AM

Great story! I think you need to use this one in a book.

Thanks, Andrea. You never know where it could be useful. :)

My kids are now trying to make thin air turn into a kitten.