Monday Moment #51: a writing prompt for your work-in-progress


Cuppa Jolie has gone a bit festive over the holidays. Cheers!

I hope every one's past week has been merry and bright.

We had a lovely Christmas here at Chez Cuppa, although we also experienced a loss. Gasper, my 9 year-old girlie's pet gerbil, died. Gasper was a lovely, little rodent. He really was. He was white and charming and friendly and never a problem--at least not until the last month or so.

Here's the thing, Gasper was a senior, well over his expected two years of age. He was showing NO signs of slowing down. In fact, just the opposite. In the past, this was a gerbil that stayed within his boundaries, never once trying to escape. We could even leave the top to his aquarium off and feel safe that he would stay put. It did have a lid that we kept on it, but we never took precautions to cover the gaping holes up top (a removed door and gerbil tube). 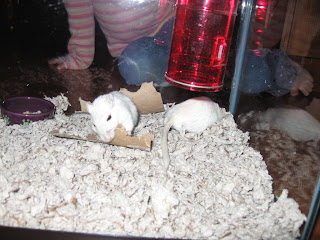 However, several weeks ago we discovered him standing on top of his cage, and noticed the picture frame hanging above it had been nibbled on, like he'd been getting out regularly to stand on top of his roof and take a look around, enjoying the view. Then, about a week later, he was loose and running around. Needless to say, his tank had to be reinforced. We were seriously surprised because he was so old for a gerbil. Then again surprised when I discovered his strategy. He wasn't climbing up his water bottle to get out. No, he was leaping. He could leap up and grab the edge of his tank, like a little super rodent.

So, we were very saddened when, the day before Christmas Eve, he slowed down. A lot. It was obvious that he was dying.

That Gasper had grown on me, darn it. Not only was I sad that I had two little girls who were broken-hearted, but I was sad myself.

Here's the part I didn't tell you. If you would have told me two and half years ago that I'd have a gerbil in my house, I would have told you NEVER. NEVER! An emphatic NOT EVER.

Let's just say a horrible-hamster experience as a child made me CERTAIN that a rodent-type pet would never be for my family. Nope. Wouldn't happen. I was certain of it. 100%-like!

But somehow two girls (crafty ones I might add...including a crafty daddy) convinced me to think about it, to just consider. They thought carefully about it and somehow I found myself at the pet store speaking to a knowledgeable person about gerbils. I still wasn't sure, but two brother gerbils (Gasper and Niblet) came to live with us.

And those fuzzy, little fellas won my heart. They weren't stinky (usually) or naughty or violent (like those horrible hamster bros). Unfortunately, we lost Niblet before his first birthday (too soon), but Gasper stayed with us for a full-gerbil life.

And we will (I will) miss him.

What is something your character was certain of, but then later (and probably very unexpectedly) changed there mind about?
Posted by Cuppa Jolie at 6:58 AM

Awww, R.I.P., Gasper! Big hugs to you and the girlies.

So sorry to hear of your holiday tragedy. Sad.

Best wishes for pet prosperity in 2010!