Monday Moment #71: a writing prompt for your work-in-progress

Ah, the ways in which we screw up our kids (or potentially ensure they will one day utterly embarrass themselves) because we have given them incorrect information!

Like the time I overheard my girls talking about something they heard on the playground which involved people having sex. *mom is dying while hearing this and trying to figure out how to have the sex talk way sooner than planned* But then the younger one asked her big sis what it meant, and her sister answered, "I think it means they have sack lunch together. You know, sacks." *mom breathes easy and thinks this is a perfect answer*

Over the weekend we found piece of art lying around the house (this happens multiple time during any given day), which reminded my husband of a recent conversation he had with the girls. They were in the car when they began discussing such things as french fries and french toast when the french kiss was brought up. My husband decided to ask them if they knew what a french kiss was and they told him they didn't. He thought he'd let them in on it, but realized he was in over his head after he said, "It's when two people kiss..." and this is when he froze up but thought he needed to finish what he'd started but didn't know how, "...aaand their tongues touch." There was the chorus of  GROSS, of course. But then the girls started making up a whole bunch of other french things to ease the awkwardness (french telephone pole, french trees, french toilet). That's when the hubby asked, "How do you know it's a french toilet." The ten-year old girlie had the perfect answer, "Because it has a moustache." Duh!


Which is why this fun piece of art makes perfect sense to us, plus it made us all laugh. 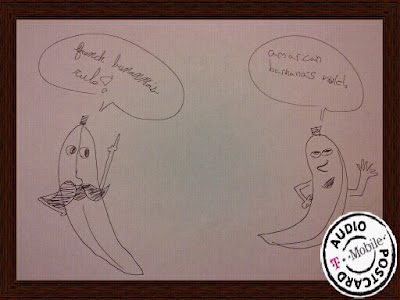 Thanks for sharing this! I love this week's prompt.

SO funny! I think my favorite is the sack lunch. "You know, sacks." Makes total sense. I love the magical innocence of childhood!

Great monday moment Jolie! I agree with Molly, I love: "You know, sacks." so sweet.