Monday Moment #98: a writing prompt for your work-in-progress

The sleeping hours. Aren't they wonderful?

Well, yes! That is, if you're actually sleeping. 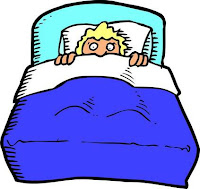 But remember how different it was as a kid? At least it was for me. I certainly wasn't playing to-do lists in my head.

What was playing instead? My imagination!  In dark-scary-night- imagining ways. For me, every nighttime noise, familiar or not, was something frightening. I still recall one night when I heard scraping on my ceiling, slow and constant. And loud. Right above me. Now I'm sure that it was a mouse, doing it's mouse thing, but in  my scared-kid-nighttime brain, it was a scary guy in my attic digging through the ceiling with an ice pick. Yes, I was sure it was an ice pick. I still recall nights when I'd hold tight to the pillow just under my head with one arm and my favorite blanket with the other, just in case I was taken during the night and held captive in a cave. This way I wouldn't have to use a rock as a pillow.
I was a normal kid, I swear. But perhaps the nighttime stories I freaked myself out with were some of the first signs that I'd one day become a writer. Do you think?

What does your character think about when they wake up in the middle of the night? What kinds of nighttime noises do they hear?
Posted by Cuppa Jolie at 12:44 PM