Monday Moment #99: a writing prompt for your work-in-progress

Okay, getting to it. I apologize ahead of time for the bit of bah humbug in this post, but a particular person sucked it right out of me over the weekend.

Isn't it amazing how one person, ONE, can bring a certain energy to a room big or small, with few or many? That energy can be amazingly positive or ridiculously negative. Unfortunately, I had the experience of the latter over the weekend.


I was so looking forward to watching both my eight-and-ten-year-old girlies play their basketball games on Saturday. But once my eight-year old's game started, all the fun was drained from the gym. It's hard to imagine how that can be when there were two teams of young girls, full of energy and sparkle, out on the court, surrounded by family, cheering them on. 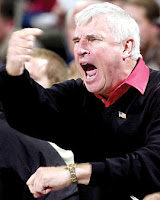 It took the crappy energy of one single man, the other team's coach, to take ever bit of fun out of the game. He stood on the sideline, never once cracking a smile, only yelling, yelling, and yelling. You'd think he was Bobby Knight or something. He required those girls play so aggressively, there was no fun to be had. He ordered them to run, even if they were headed back to the bench. He'd shake  his head and get upset if they did something wrong. I don't think I ever heard him shout encouragement. Again, these are 3rd and 4th grade girls!
I could tell even the supporters of his team were shaking their heads at the scene. Thank goodness there were no chairs around for him to throw, or he might have thrown one.

When has your character been in a situation where one other person has changed the energy in the room for better or worse?
Posted by Cuppa Jolie at 12:01 PM