As part of SCBWI Team Blog pre-conference interviews, I had the opportunity to chat with the wonderful Jean Feiwel on the phone.

Jean Feiwel's career in publishing started in 1976 at Avon Books where she rose from Editorial Assistant to Editorial Director of Books for Young Readers. In 1983, she was hired away to Scholastic.  During her tenure as Editor-in-Chief and Publisher at Scholastic, Jean is credited with inventing middle grade series publishing with the creation of Ann Martin’s Babysitter’s Club, R.L. Stine’s Goosebumps, Katherine Applegate’s Animorphs, and the historical fiction series, Dear America. When pressed, she will also admit to being involved with the acquisition and publication of the Harry Potter series. In February 2006, Jean left Scholastic and joined Macmillan as Senior Vice President and Publisher. At Macmillan, she has launched Feiwel & Friends, her own commercially minded hardcover imprint, as well as a paperback/backlist program culled from FSG, Henry Holt and Roaring Brook’s lists, called Square Fish.  In January 2009, she was promoted to SVP Publishing Director of the new consolidated Macmillan Children’s division.

It was a real pleasure to speak with her. From our conversation, here are a few of the questions Jean answered for me:


You, along with three other industry professionals, will speak on a panel about Children’s Books today and tomorrow. In a time full of change, and at times negative talk, what gets you and keeps you excited and makes you feel optimistic?
I’m essentially a glass half full kind of person. I have always been enormously adaptable, and forward looking, and I love what I do. I love working with new authors and the ones that I’ve built already. I like the combination of discovering new talent while maintaining relationships that I’ve already established. The reason for the name Feiwel & Friends is: make new friends but keep the old, one is silver and the other’s gold. That represents my philosophy of publishing.
Young adult books are on fire right now. Why do you think young adult books are leading the way in the book sales and are today’s hot market?
I think that because there were plenty of middle grade series that sort of created that audience. I think Harry Potter being the most instrumental. I think Harry Potter was huge. I think it galvanized reading in general for kids, and for a whole population at a time. I think that’s part of it. And I think these things are cyclical. I’ve been around long enough to see there have been periods of times where young adult has been the dominant category and I’ve seen it over populate and max out in a way and sort of go into a hibernation.  I’m not surprised to see it so strong at this point. I think Stephanie Meyer happened to be somebody who hit a cord at the right place at the right time. The audience was there and waiting.
In that whole cyclical nature of things, does that also bring hope and optimism for the picture book?
I really feel like the demise of the picture is strongly overstated. I found with working with the press, in some ways, they want to sell papers, they want people to read what they write, so they tend to exaggerate. This is certainly an exaggeration. I think there is no doubt that the picture book category has changed, in that, kids are being hurried through childhood and hurried through the category…Kids want to read that reading book that chapter book, they want to feel accomplished and if they’re are being read to from the time they are in utero then they are not going to sit there with Bread and Jam for Francis, they’re going to want to be pacing through, along side of their brothers and sisters, the older books, so I think that has contributed to the category being smaller or in decline. But I think that’s okay because I think all of us have over published in the category. I think that a lot of books that duplicate each other. It’s a matter of being smarter in your publishing, and more focused. There’s definitely still an audience there, and it’s just a matter of not flooding the category. That would make for a healthy business all around.
As you and your fellow editors look to acquire books, is there one element that grabs you each time, that one essential element?
I say this in my rejections letter, if I don’t emotionally connect with something I’m not going to respond to it. There’s something about the story that has to pull on my emotions in some way. It has to make me laugh. It has to be very dramatic. It has to surprise me. Something has to happen for me to respond to a story. Even it’s something I’ve heard a lot , even if it’s yet another vampire story, if there’s something in it that feels fresh or emerges in some surprising way I’ll will respond and go after it. There has to be something emotionally alive in it for me. 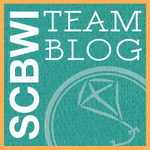 Don't miss your chance to hear from Jean Feiwel and many others at the upcoming SCBWI conference in NYC. Register HERE.
Posted by Cuppa Jolie at 9:04 AM

I love that expression about needing something in a manuscript that is "emotionally alive." Well said! Thanks to you both for the interview.
Namaste,
Lee

Great advice on staying positive, thanks.

All of these pre-conference interviews makes me wish I could attend the conference. The interviews are great! I love reading advice for writers. It keeps me motivated to write and publish. Thank you!

Love what Jean said about that **one thing** that pulls her in. Such great advice. Thanks!

Great interview. I totally get the part about needing a manuscript to have something emotionally alive in it. Thanks to both of you!

Hi Jolie, this is the only way I can contact you, so sorry if it's inconvenient.

I'm in SCBWI Australia and we're in the process of setting up a blog for our 2012 SCBWI Conference in June.

I was very impressed with your blogging team's efforts for your Winter Conference, and was wondering about how you set up your blog's appearance. I see you used Ethereal template, but you managed to put your own background across the template. How tricky was that to do? I'd like to put an original, more suitable background on our blog too (the blogger ones are a little ... umm, boring.

Looking forward to hearing from you
best wishes
Sheryl

Don't worry about my last comment, Jolie. I worked out what to do - it's not difficult to do at all, good old Blogger! You can delete my comments if you like.
best wishes
Sheryl

I like your blog.If you want to see my blog : fashionfrommyeye.blogspot.com