Ever wonder if you should get involved with SCBWI? Attend a conference or other event? Matthew Kirby is one of many SCBWI success stories who might stop you from continuing to wonder and actually get to doing.


Matthew is the award-winning author of CLOCKWORK THREE, ICEFALL, and the forthcoming fifth book in the Infinity Ring series. As I type, my own daughter has her nose buried in ICEFALL and she's loving it. 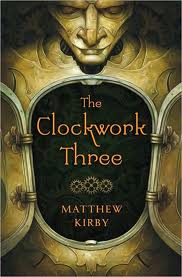 It was my pleasure to ask Matthew a few questions and I look forward to hearing him at the conference where he will be presenting as part of the Writers Intensive: Elements of the Novel.


You found your writing sweet spot in books for young readers. When you made the switch from writing for adults to writing for kids, what changed for you as writer (other than publication)?

The switch came about in a moment one day, driving alone in my car. An epiphany, I guess, though it felt more like someone smacking me upside the head than a shining revelation. I had been writing seriously for six or seven years, and by that I mean I was actively writing and submitting (and growing an impressive pile of rejection letters). During those years, I was trying to break into adult fiction markets, mostly science fiction and fantasy. I'd had a few minor successes along the way, but I was approaching what felt like my limit for disappointment and discouragement, and I was at that point I think many of us reach where we contemplate giving up. But you need to know that at that time, I was a school psychologist working in elementary schools. My leisure reading was almost exclusively in middle grade and YA, genres I loved. AND most of the protagonists in the stories I was writing and submitting to adult markets were kids. Should have been obvious, right? That's what I mean by a smack upside the head. So I was driving along, and suddenly all these things occurred to me at once, and I paused and said to myself, "Wow. I wonder if I'm a children's writer." Then I wondered if there was an organization for children's writers. I went home, found SCBWI, and joined that same day. I attended my first annual conference the following summer, and the experience was incredible. I felt like I had finally found the place I truly belonged as a writer.

Congrats on ICEFALL'S many awards. In a recent blog post about your PEN Center USA Award, you mentioned Ursula Le Guin, who also provided a blurb for ICEFALL (wow!). How has her work influenced your own writing?

It is no exaggeration to say that I am a writer because I read Ursula K. Le Guin. When I was twelve or thirteen, my parents gave me A Wizard of Earthsea, and the experience of that book was transformative. There is a place in the story where the main character, Ged, engages in a forbidden summoning spell, something way beyond his ability to understand and control. He opens a portal onto another plane, and this is how Le Guin described what happens next: "...and through that bright misshapen breach clambered something like a clot of black shadow, quick and hideous, and it leaped straight out at Ged's face." 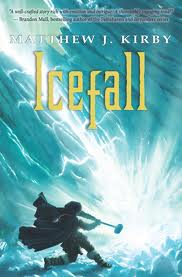 As a young reader, that sentence stopped me in my tracks. The power of it. The words. The whole scene is breathtaking. I went back and reread it, and reread it, and reread it. I marked the page with its own bookmark, and even as I moved forward with the story, I'd go back occasionally to that moment to read it again. In that book, in that scene, in that sentence, and even in that single word, "clot", I became aware of the act and art of writing and storytelling. I'd always enjoyed making up stories, and I'd been doing so since the third grade. But I'd never before considered it something powerful or important, and I'd certainly never thought about becoming a writer when I grew up. But after reading Le Guin, I knew that's what I wanted to do. And to this day, I carry a love for words and a care for the words I choose in my own writing.

I'm very fond of something Richard Peck said at an SCBWI annual conference a few years ago. "We write by the light of every book we've ever read." That is true. And for me, Ursula K. Le Guin shines brightest.

What is your favorite part of the writing process? Least favorite?

My favorite part is the beginning of a new story. The casting about for the voice and the language in which that story wants to be told, and the magic and thrill of finding it (I'll never forget the moment when I first met ICEFALL's Solveig). In the beginning of my writing process, a story can be anything, and contain anything. It's all possibilities when I start a new book. The characters haven't made any choices yet that might limit their later choices. That changes as the story moves forward and assumes its shape, after which the possibilities become limited to what is true and authentic to that story and its characters. Basically, when I begin a book, it seems big, but as I write, it gets smaller and smaller until the end. While that means I face an inevitable deflation when I stand at the end of a book and look back over it, there remains the quiet joy that comes from seeing something for what it is. And it has to be that way. Stories about everything are really about nothing, and offer no meaning, ask no questions, and provide little truth.

My least favorite part of writing is revision. I hate it, and I always have. Left to my own devices, I am far more likely to go after what is new and shiny than return to polish something I've already found. But my writers' group and my editor show me on a continual basis why it's important. So with their help and feedback, I make myself do it, and I hope my stories are better for it.

What’s next for you?

Next fall, I have two books coming out. One of those will be my installment in Scholastic's INFINITY RING series, a new multi-platform time-travel adventure. It's been a blast working with the other authors on the series. The other book will be a standalone, a Jules Verne-esque Colonial American fantasy. I've also begun work on a new trilogy called THE QUANTUM LEAGUE. It's a contemporary magical crime saga, with quantum physics and dueling magicians. The first book will come out in spring 2014.

Sounds exciting! Thanks, Matthew!
You can follow on twitter at: @writerMattKirby
Posted by Cuppa Jolie at 5:00 PM

Thank you so much for this fascinating interview. Matthew, when you say "I carry a love for words and a care for the words I choose in my own writing", I truly believe it because it comes through in your writing.

great interview!
written by one great writer about another favorite writer.
funny, smart and insightful!
keep up the great work. : ) mj