The time has come, Smackdowners. This was no easy task, believe Holly and me. We wanted to give an award to every single one of you (stay tuned for that...).

But first, I think we need a theme song to get us in the mood:

One month, one book, one moment...

Are you in the mood now, Smackdowners?? Because we have some whip-lashin' awarding to do!

First, we have the Honorable Mentions:

For her sheer force of revision output, we dub Helen Landalf our first honorable mention. Helen completed a major revision of her YA novel, and with the guidance of her agent, has embarked on her final polish. Yay, Helen!

For revising both writing and illustrating and learning much through the process, we dub Realm Lovejoy our second honorable mention. Realm completed a graphic novel revision, wrote 80 pages of a new WIP, and completed six illustrations. Rock on, Realm!

And finally...the name you've been waiting for...our WHIPLASH AWARD recipient, who will be showered with our praise not only for her own considerable writing accomplishments this month (which she humbly did not deem award-worthy), but also for her encouragement to several other Smackdowners (you know who you are!) as well as flying across the planet for a family emergency to save the day....

Congratulations, Martha!!!!!!!!!!!! We won't offer you crackers for dessert...instead, we offer coffee and licorice love, courtesy of Jolie and Holly.

Now, for all of you Smackdowners, we offer a badge of your licorice-lashing honor to commemorate the impressive work you have done here:

Or, if you prefer to put it in your sidebar: 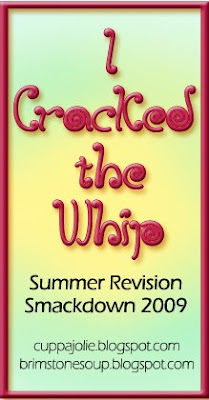 Now give yourselves a big cheer, Smackdowners, and go on over to Holly's blog to sign up for the continuing saga of the Summer Revision Smackdown!!!!!!!!!
Posted by Cuppa Jolie at 4:00 AM

Jolie and Holly,
Thanks for encouraging us and bringing us through June. Now, on to July! Wahoo!

I can say this is truly unexpected. So many people worked so very hard this month--it was inspirational to watch goals get smacked. It definitely made me want to keep on going, even when things got rough.

Thanks, Jolie and Holly. And thanks, fellow smackdowners, for the inspiration.

Woohoo ... congrats to all!

Yay, Martha! Congratulations on the Whiplash Award, which you so deserve. You're an inspiration to us all!

And if I haven't said it enough, so are you, Jolie and Holly. Thanks for the whip-smackin'!

All right MARTHA!!! You had my vote for sure! Thank you for your help and for being witty. Not enough wit in the world nowadays. But we have Martha. Excellent job Martha.

What a privilege to get to know so many of you smackdowners. This has been a blast for me. Holly and Jolie will surely be whisked into writing heaven for encouraging so many of us this way.

Vivian, hip writer mama, you've been so encouraging and kind, while kicking butt, same with Kjersten. Kjersten is one of those humble people who are so generous with praise but decline to mention that they are packed so full of talent themselves that if they had even a speck more they'd explode like a Kjersten water balloon.

Cocoa Jaime has also been funny (extra points) while being really encouraging and kicking butt on her own stuff while working, etsying her heiney off, and generally being an excellent artiste.

I'll stop here for now, but there are a WHOLE lot of you that have been so very cool in this. I love how generous and encouraging children's book writers/illustrators are. Especially these ones, here's looking at you Sara and I chiuahuaha.

Thanks everyone. Better tighten your britches though, if you think you can keep up in July! ; )

Oh and great job on the obligatory opening Martha,

"I can say this is truly unexpected." You just forgot to thank Jesus though, so we're gonna have to take your oscar back.

Ben's brain: Danger Ben, never tease Martha. She is MUCH cleverer than you! And now with this reward, she'll revise YOU!

I hope your dad's doing better by now. And I hope you get a chance to relax and de-stress after that crazy Smackdown/Family-Emergency month of June.

Congrats to the most honorable Helen, Realm L, and Kjersten! And hats off to grand-prizer Martha!

Thanks for instigating the Smackdown, Jolie and Holly, and thanks to all the other Smackdowners for contributing to the group. The little extra push from signing on for the challenge was worth it.

Afraid to go looking for the July lashing opportunities (crazy, hazy month here!) but will scope out the scope and see if I can participate.

Onward to a great and productive July.

Congrats Martha! I totally think you deserve it.

And, like Martha, I also must say, What?!? The honorable mention surprised me too -- so many people were so inspiring through this whole smackdown, I feel humbled.

Thanks again, Holly and Jolie for putting this on!