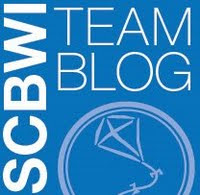 The conference is just days away. Just days!

If you are still considering attending, here's one more reason: Alvina Ling! She'll be easy to spot. She'll be the one floating on air. (Oh, wait. Libba Bray might be floating on air too. Or soaring.)
Alvina Ling is a senior editor at Little, Brown Books for Young Readers and (as she mentioned on here blogs) is still basking in the glow of of Grace Lin's Newbery Honor. Let's put this in caps...HUGE CONGRATS TO GRACE LIN FOR HER NEWBERY HONOR FOR WHERE THE MOUNTAIN MEETS THE MOON EDITED BY ALVINA LING.
You can find Aliva's blogs HERE and HERE. You can also follow her on twitter @plantalvina.
I had a chance to throw some questions her direction before all the ALA excitement. Here's what she had to say:

What an exciting year it's been for you and your authors, including Grace Lin's WHERE THE MOUNTAIN MEETS THE MOON as an Al's Book Club For Kids pick, and the huge success of Peter Brown's THE CURIOUS GARDEN and Justina Chen's NORTH OF BEAUTIFUL. Can you tell us what your looking forward to in 2010?

Oh, well thank you! Each year brings so many new, wonderful, beautiful books. Forgive me, but I’m going to mention a lot of them! This year, I’m excited about two debut YA novels: GUARDIAN OF THE DEAD by Karen Healey, which is dark urban fantasy set in New Zealand and steeped in Maori lore; and SORTA LIKE A ROCK STAR by Matthew Quick, which is about a girl named Amber Appleton who has a tough life, but is the self-proclaimed Princess of Hope. I call the latter novel “Juno meets Stargirl.” Grace Lin has her first early reader LING AND TING about two adorable Chinese American twins; I also edited a super silly, hilarious picture book called SHARK VS TRAIN by Chris Barton, illustrated by Tom Lichtenheld; Jerry Spinelli’s picture book I CAN BE ANYTHING, illustrated by Jimmy Liao is pubbing in March. Peter Brown’s next picture book is coming out this Fall called CHILDREN MAKE TERRIBLE PETS—he’s using a new art style that’s really great, I really think this is his best book yet; Also in the Fall is Wendy Mass’s next middle grade novel THE CANDYMAKERS, about four kids who compete in a candymaking contest. There’s a really cool urban fantasy by Cate Tiernan called IMMORTAL BELOVED, the first in a trilogy; and also Sean Beaudoin’s third novel is YOU KILLED WESLEY PAYNE, a neo-noir set in a HS where Cliques are battling for power. And last but not least, I’m excited about a beautiful, powerful picture book biography called DAVE THE POTTER: ARTIST, POET, SLAVE by Laban Carrick Hill and illustrated by Bryan Collier.

Is there one request you find yourself asking of your authors (in the editing process) that you could share with the rest of us?

I can’t say there’s one request that comes up across the board, but if I had to pick two things, I would say I’m often asking authors to bring more emotion into the work, and am also keeping an eye on making sure each book is a very satisfying read.

As we approach the upcoming conference, and knowing you have participated in others, as an editor what's your biggest take away from attending?

Conferences are a good reminder for me that all authors had to start somewhere. I truly believe that with hard work, honing your craft, and persistence can lead to success for authors, and I’m happy to help. I love meeting new people, and conferences are a good place to meet them! Authors, other editors, agents—it’s great knowing that we all have a love of children’s books in common.

What's one bit of advice you would give to those attending the conference?

Take advantage of opportunities, but in a respectful way. Don’t be shy! Meet all the people you can, you never know the effect someone may have on your life. Oh, and take notes—all the information can be overwhelming, but if you write it down, you can dissect it later.

If we ordered a Cuppa Alvina Ling, tell us, what would we be getting?

Ha—what a fun question! Let’s see. I think a cuppa me would include a dash of laughter, a sprinkling of hope, some adventure, some tears, some curiosity, and all topped off with a scoop of strawberry ice cream!
Posted by Cuppa Jolie at 5:42 AM

Great interview! And so many wonderful books!

I've found a really neat thing about good conference notes is looking at them later and finding I can absorb things in a different way--maybe even on a totally new project a year or two later.

I really liked this interview - it gave a flavor (strawberry ice cream?) of what to expect from Alvina's "The Real Deal about Literary Novels" workshop - I can't wait!
See you both super-soon in NYC!
Namaste and a Hug,
Lee

That is a really great interview!

I've met Alvina (she had a super striped scarf), and you're right--she does kind of float!

What a fun interview! I thoroughly enjoyed it. Have a great time at the conference. :-)