Back at The Vault. Day Two. It's been such a long time, two days in a row feels, well, I guess...special.
As promised...here are the pictures of Jesse Watson's art hanging on the wall at The Vault. 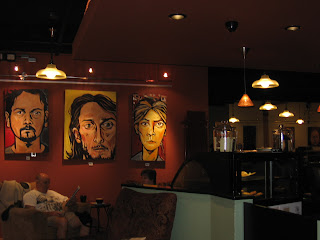 It's hard to see in the above photo, but there are three more on the far back wall. Eleven faces total. Here's more. 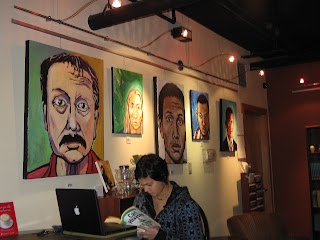 It's as if all those eyes are on me, motivating me to get to work, or at least keeping me accountable. That's what I've asked them to do.

Jesse's show is titled MUGSHOTS and can also be seen in this youtube video.

Jesse and fellow Port Townsend talent Patrick Jennings will be having an event right here at The Vault (I'll let you know the date when it's official) to celebrate Jesse's show and Patrick's new book WE CAN'T ALL BE RATTLESNAKES (in stores today!). Patrick will also be a speaker at this year's SCBWI Western Washington conference.

Today it was Patrick I had the pleasure of bumping into at The Vault. What a cool town, eh? One day it's Jesse, the next Patrick. Who will it be tomorrow?
Posted by Cuppa Jolie at 1:41 PM

I just got the latest Horn Book issue and Patrick has yet ANOTHER extra hilarious Cadenza at the back. Worth the price or the effort to track the magazine down. (Not available on the Horn Book website sadly)