Tomorrow is Barbie's 50th birthday. 50th! Wow. She's almost old enough to be my mom. But, you know, it would be cruel to have Barbie as a mom; the name, the long legs, the frighteningly tiny waist, the big, huge... 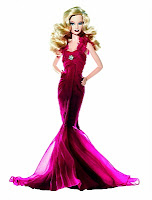 HAIR! (What? Where was your mind going? Yah. She has those too.)
Barbie has influenced little-girlie brains for so long. Just think, 50 years times millions of impressionable girls, well, that equals a ridiculously big number.
I myself didn't have many Barbies. Only a few. But it was enough, and I did have a Ken (or some version of Ken) which was key. My neighbor friend, however, had a Barbie wonderland in her house: The multi-leveled house. Tons of dolls. Plenty of boys. And most important of all, a huge wardrobe with a slew of shoes--all enough to make a Barbie Dream Closet smile.
Now, here's what I've realized. I totally wrote SEX AND THE CITY as a pre-teen. I mean, was Candace Bushnell secretly my neighbor friend or eaves dropping as play-acted out the huge hit? Really. She must have been. For me, Barbie was all about the fashion and hair ala Carrie Bradshaw. Next, it was all about the boy(s). The dates. The kissing. And, of course, the taking off of those fabulous fashions at the end of the night. (Oh, c'mon...no judging. You know you did it, too. The hiding in the closet with your naked Barbie as she totally mashed on Ken!)
So, Happy Birthday, Barbie. May you have many more years of being played with by little girls, even though they might toss you into the closet or under the bed bare naked because their mom just opened the door and scared the pants of them.
"What's you doing, sweetie?"
"Ah, nothing, Mom," little girls says holding up her fully-clothed Skipper Doll. "Just playing."
Posted by Cuppa Jolie at 9:57 AM

Ha-ha-ha, Jolie. I can totally relate, even though I'm older than Barbie. (I guess that also makes me old enough to almost be your mom. Yikes!)

After 50 years Barbie is still in great shape; how does she do it?