Okay...so I've never been much of an actor. But that doesn't mean I didn't have wonderful experiences in theater productions as a child.

I even starred as Beth in Little Women. Impressive, huh? Well, actually...you shouldn't be. It was in my high school drama class. The class where my teacher called me Jolly for half of the year. Plus, she had to cast me since I was in the class. And, I'll be the first to tell you, I didn't show any promise as an actor.
Let's jump back further. I grew up in a small town in Montana, and for several years, the Missoula Children's Theater came to town and put on a show. A show starring us kids.
Here's a picture of me during try-outs that was in the newspaper. 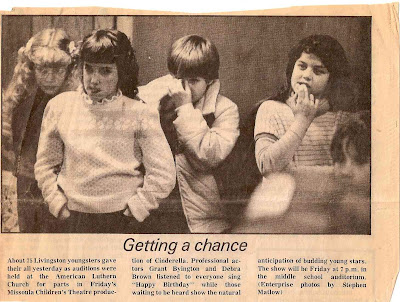 What do you think of those bangs? And, I totally remember that sweater with the ruffly turtle neck. Isn't it funny how you can remember your clothes from so long ago? That's my little brother standing next to me. He was the one who always got cast in the bigger roles.
I never had a major part, but I did make it into a the shows. I was in Snow White, Cinderella, and Johny Appleseed.
Now here I am today, in Washington state with kids of my own, and surprise, surprise--I find out the Missoula Children's Theater comes each year to work with my girlies' new school. They attend an alternative school which is a multi-aged classroom (grades 1-5). I never expected that my own kids would get to have the same wonderful experience some day. I had no idea that the Missoula Childrens Theater crew even travelled world-wide to work with children. Pretty cool, huh?
It's amazing company. This is how they describe their tours:
"A little red truck pulls into your town with everything it takes to mount a full-scale musical production...except the cast.
That's where the children of your community come in.
On Monday, they're cast as characters.
By Saturday, they've gained character -the kind that really counts."
And I love how they cast.They don't talk to anyone before auditions. In other words, they don't let teachers or parents influence how they will view each child before they cast. The two travelling actors are unaware of the class clown, the shy one, or the child who suffers from learning difficulties. Guess who sometimes gets the starring role? Love it! That's transforming. That builds character.
So when my girlies were cast into their roles as part of the Robin Hood production (as a skunk and a forester), it was fun to dig into my old photo albums and pull out my pictures to share with them. I think they got a kick out of it, too.
Here's me as a Lady in Cinderella... 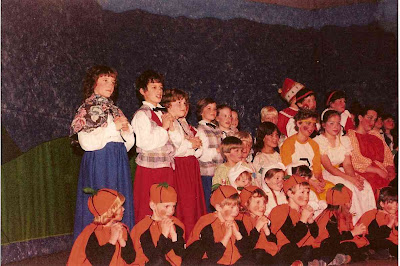 I'm the one on the end in the blue skirt.
And here's me as a ghoul in Johnny Appleseed... 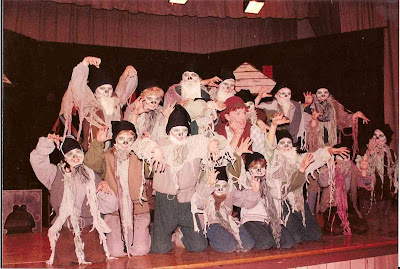 That's me, the cute one!
And now here are my girlies... 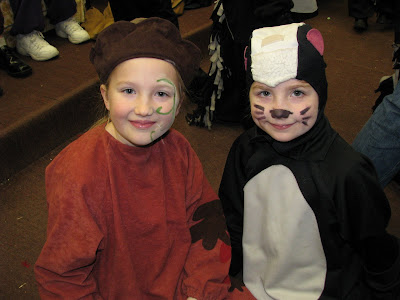 My fern child and little stinker...the casting was perfect!
Okay, now to finally get to the Monday Moment prompt.
We were able to purchase DVDs of the show and the girls just got to watch it yesterday. My little skunk noticed (and remembered) that, in her words, she "got confused and forgot to shake her booty." (The skunks did a very cute little tail-shakin' dance.) This really bothered her, upset her. And I wonder if it's one of those little insignificant thing that no one will ever remember...except for HER.
What is a moment when something happened, or words were spoken, that are long forgotten by all except your main character?
Posted by Cuppa Jolie at 6:14 AM

What a great writing start! Jolie, you could write a book just about interesting writing questions. Really.

My gosh, your girls are gorgeous - just like their mama. xo

love the scarf! None of you looked very thrilled to be in a photo. Sometimes I think the 70s were a conspiracy to create bad photos for us to look back on - b/c my kids dont seem to have bad photos now-a-days.

Thank, Holly! You know how to make a girl feel good.

Shelli, what are saying? My photos aren't so attractive? Okay...they aren't!