Monday Moment #56: a writing prompt for your work-in-progress

I returned from New York to a week of DRAMA!
No, really! Quite literally...drama.
This was theater week at the girlies' school. A small (two people) acting troupe came in on Monday, auditioned the kids, then they get to work on an hour-long production of Peter Pan to be presented on Friday and Saturday. Ambitious, no?
I returned just in time for the girlies to tell me the parts they wanted to get. In the words of my seven-year-old girlie, "I want to be Tinker Bell, Tiger Lilly, one of the fairies, or one of the mermaids. But I think I'm going to be Mullens and I don't like Mullens."
Well, she didn't get the part of Mullens, but she also didn't get any of the parts she wanted. Nor did my nine-year-old girlie. This is when the real drama got rolling. I had two girls who were not too happy to have gotten the parts of Scar and Bellamy, pirates. Greater insult for the biggest girlie, her little sister got twice as many speaking lines. Ouch. 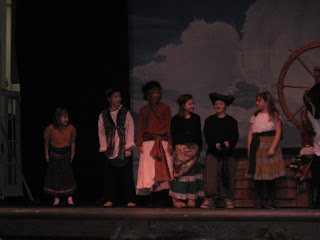 But I have to say, after pouting and tears and much complaining, the parts grew on them, and come Friday and Saturday, that production of Peter Pan, was a joy.
When has your character experienced disappointment and had to watch another person play the role they wanted?
Posted by Cuppa Jolie at 6:09 AM

Was this Missoula Theater? My kids did it last summer. Neither got the part they wanted either, but they had a lot of fun. Amazing how much they can learn in a week!

What a great prompt. When my son wanting to take an acting class, I told him he could do it, but he had to be happy about whatever part he got--even if it was being a tree. :]

Sherrie - You know it wasn't Missoula, but they did Missoula last year (and I did many times as a good...such a fun time).

This is a great post thanks for writing it.