My fingers flew for sure. And no joke, I had a sore arm after finishing. The whip cracking provided by the wonderful Holly Cupala certainly got the job done. I still would have done some writing today, but I bet (without the challenge) I would have gotten only half the words down in the same amount of time. It's kind of like cleaning the house; if you've got the whole weekend to get it done, it'll take the whole weekend, but if company's coming over in three hours, it'll get taken care of--and quick!
So many things helped me get it done.
First, Holly mentioned (somewhere along the line) about being at a macro level instead of micro. Keeping this in mind helped me bunches. It's the big picture story I'm working on. I can go back later, when I'm more in tune with the story and the characters, and add the details that will make all the difference. Right now, I need to make the character walk and talk and doing that helped me get to 5000 words.
As soon as I sat down, (I had 12,495 words)I wrote out what my word count would be for each 1000 added. You can see I added five extra (making the goal 1005) on the last round because it just made sense to get to 17,500 words. 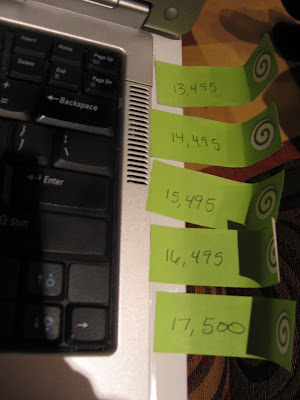 Each time I finished I removed the sticky, wrote down the time and the word count I stopped on. Here's how it went. 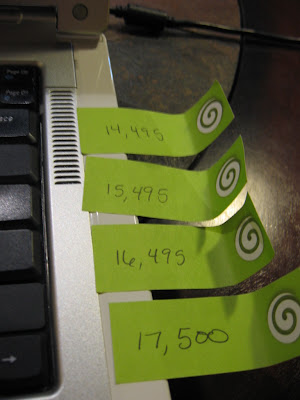 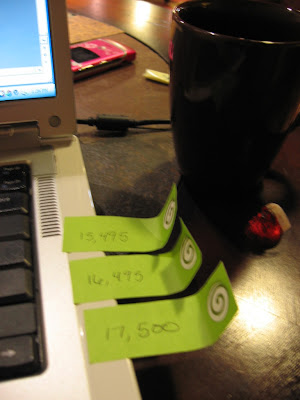 Sticky three was ripped off at 2:20 with 15,653 words.
I believe there was more coffee and another caramel Kiss (for moi). 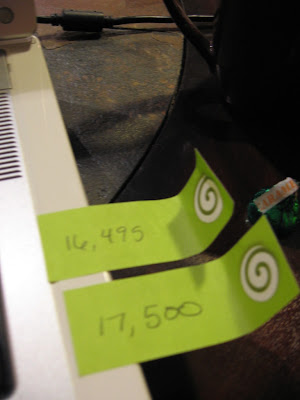 After the fourth sticky came off at 3:03 with 16,575 words, I have to admit I was feeling a bit weak and needed something to get me through. I barely had the chance to get a picture of it. But there it is (below) an almost completely devoured chocolate chip, macadamia nut, and coconut cookie. And it worked! 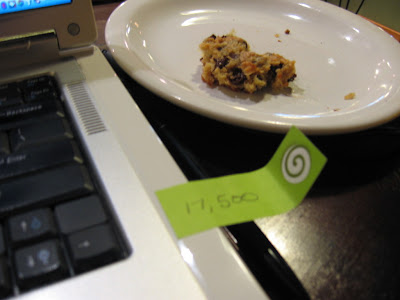 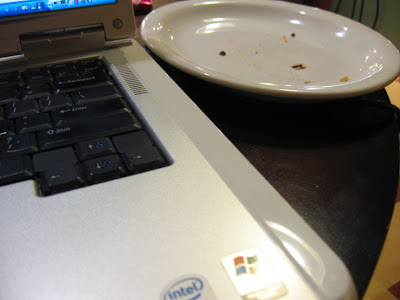 Oh, did it feel good to removed those little, green stickies over and over.

But what really helped was the back and forth I had with Holly all afternoon. We didn't plan to write at the same time, but it ended up that we did. And throughout the afternoon we checked in with each other on our word counts. Somehow, it was a friendly back and forth that kept us both moving ahead.

And now Holly (crazy girl that she is) has suggested we do it again on Thursday!

You go girl!! Coffe and chocolate always works for me too :)
Thanks for the inspiration!

Wow. I'm super impressed and inspired, but not surprised!

It seems like you are bringing some Body Pump mentality to the word count counting and timing. I think you should do cardio sprints in between word count goals on Thursday. To help out I will eat that cookie for you instead.

I'm using you and Holly as some outside accountability to get 3 paintings done by Friday at 5pm. And I'm not supposed to eat anything cookie-like until I make that goal.

So, are we on for Thursday, then?? Woohoo! My official start time is 9:30, after I drop you-know-who off at preschool.

I was about to write, "Make that 10:30, because I have to putter first." But that would be so bad, wouldn't it? Isn't that puttering necessary on some level? ;)

Kim...you're very welcome (and what a cute babe).

Jaime - you know, I'm also teaching Bodypump tomorrow so after 5000 more words I should be completely exhausted. Plus I'll be checking with you on those 3 paintings by Friday.

Holly - Yes, I believe we're on for another sprint.

Wow, Jolie! Awesome. I feel inspired too. I've definitely been too micro with what I'm working on...

I am so proud and impressed! YAY JOLIE AND HOLLY!!!

Love the sticky notes. I'm going to try this on my next day off. Thanks for the inspiration; I need it right now.