Weekend on the Water

It’s not sleeping because it’s the middle of the day.
*
I’m guessing half of you already know. You should scream at me, “Jolie, you should be writing. Your NaNo word count is, well...not so hot.”
I know, I know. It’s bad! But it could be worse. I’ve actually been pretty tied up, and even though I haven’t added significantly to my NaNo word count, I have been focused on writing. And right now—well not exactly right now because I’m blogging—but just prior to the blogging and again after, I was and will be writing. From right here…look: 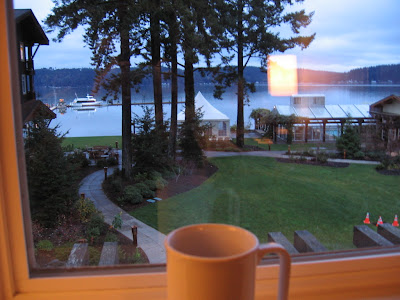 This is a very nice spot to write. I'm sitting on a cushy window seat, drinking Orange Spice White Tea, while looking out at Puget Sound. Ahhhh!

We just wrapped up the SCBWI Western Washington Fall 2008 Retreat. It was a Weekend on the Water. It was also a weekend in the rain, because, holy raindrops from the sky, did we get dumped on.

The focus of the weekend retreat was voice. You know, that thing that editors say they are looking for, that thing they say they “know when they see.”

So a group of about fifty writers spent the weekend, tucked into the beautiful Alderbrook Resort, playing with voice: trying to define it, discover it, and hone it with the help of Patricia Lee Gauch and Darcy Pattison. A pure treat is what it was! 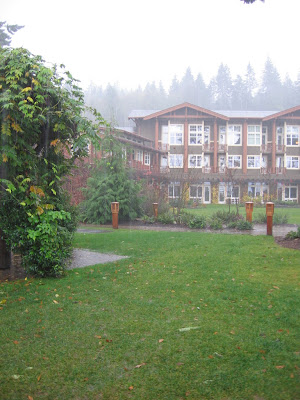 Yes, that's the rain. But nature also showed off in other ways that I couldn't photograph, like salmon swimming up stream and harbor seals just off shore. Lovely!

Then there was this cool creature: 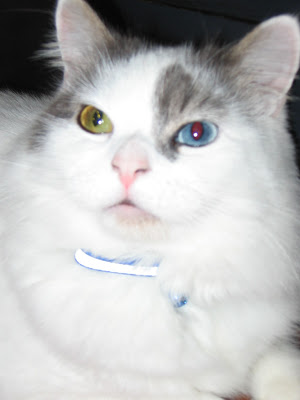 That's Brook, a resident cat with the most amazing eyes.
Friends of the human variety were there, too! 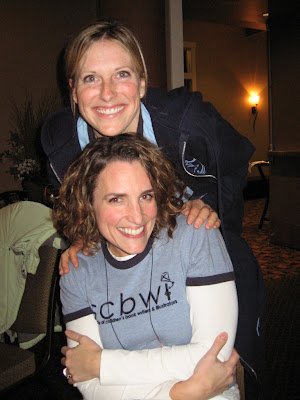 Friends...old and new. That's me and my partner-in-crime, the other Co-planner, Sara Easterly. See, when we stack up like a totem full we make a whole instead of half a Co-. I have to say, an amazing group of people sure helps make a retreat go from great to spectacular. 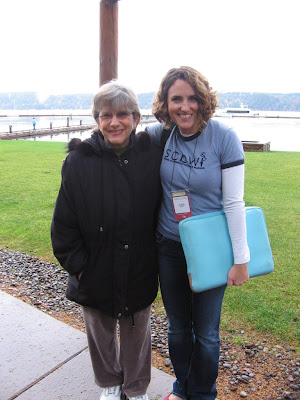 In a brief moment of dryness (very brief), Patti and I posed for a picture on our way to lunch. Not many minutes later, our waterfront tent had a small river running through it (no Brad Pitt in this show) as the rain came down in sheets.
Patti is a little-thing packed with massive quantities of wisdom (and generosity). It rained down on all the retreat attendees as hard as the actual rain. And just like the ground all around the resort, it was almost impossible to soak it all up. But we did our best.
A little taste of what Patti said about voice (really, one has to experience Patti to benefit fully): A good voice is aberrant. The writer doesn’t go out to meet it, but goes in to meet it. Voice has modulation. It’s conversational. It should have asides, phrases, strong use of particulars, and be full of attitude. 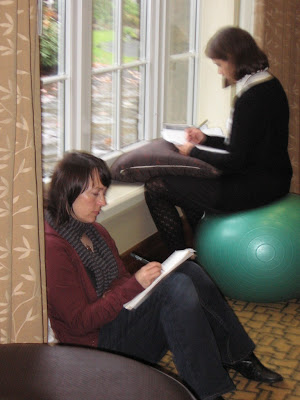 Here's an exercise Darcy gave us. While writing, try getting your body in different positions, or a different spot in the room. Use a different instrument; put away your laptop and use a pencil or vice-versa, or how about using different sized paper. There was one attendee who wrote in a spiral (just for five minutes) and she remarked about how it forced her to turn off her internal editor because it was too hard to go back and revise. She could only keep go in and in and in.
*
If any of you have a chance to go to an event where either of these two women are presenting, don't blow it, get there...you'll thank me!
*You might be wondering about the asterisks. I've been fighting with Blogger because it wouldn't let me put spaces in two spots (no matter what I did). So I tricked it to by putting an * there and making a point.
Posted by Cuppa Jolie at 7:55 PM

This sounds idyllic! Cold rain plus hot tea plus a view of the water. It looks wonderful.

That's interesting advice on changing your position or writing technique. I wrote my last draft all by hand -- something I heard Susan Cooper mention at a conference. It felt like I was writing with more care and deliberation. Dialogue especially felt tighter. I used the right side of a notebook for the story, and the left side for notes, doodles, questions, notes, etc.

I did a quick surface edit as I typed it into a Word document once a week or so.

It turns out that quite a bit of it had to get trimmed in revisions, though, so it obviously wasn't nearly as tight as it had seemed while I was writing it! Some of that is probably due to the inherenent puffiness of my first drafts.

For whatever reason I've switched back to keyboard-composing for my current book. But I love seeing two or three notebooks filled with the hand-scrawlings of that first draft! If only my handwriting was better.

Ooo, how lovely! What a gorgeous place to work your craft.

Any improvement in NaNo land? I am experiencing extreme suckage. Painful suckage. Make-me-want-to-quit suckage. Was it really this hard last year??

(And the picture of your manuscript the other day was SO BEAUTIFUL! Ahhh! Pages!)

That sounds so marvelous, Jolie! Thank you for sharing the experience - I wanted so much to go this year. But somehow Darcy's advice penetrated by osmosis - I just moved my laptop from the office to the dining room, where I have a much more dynamic view and even a little sunshine at the moment. And what do you know, I've hit 1/3 of my ridiculous goal for the day and still have 2 hours. Here's to making goals and striving to hit them.

No writing comments to leave, but isn't Alderbrook the best?! My mom and I had one last "mother/daughter" trip there in August 07, while I was pregnant. Everything is so beautiful. Did you eat at the restaurant? I had the best fish and chips and hot crab sandwich in my life there.

So glad you all had what sounds to be yet another fantastic SCBWI event! Wish we could attend them all, but we're SO looking forward to seeing you (and everyone else!) very soon! Yay! :)

And congrats on writing even if it's not as much as you'd like. I've not doubt you'll make up for your days off soon enough.

AHHH!!! I'm going to steal your asterisk idea. The no space thing is killing me.

I'm new here. Browsing around via Alice's cwim. I can see using your ideas in writing class with students in school. Sad...but my son's school is SO locked on the perfect 5 paragraph essay, that in 6 years, they have yet to allow VOICE to be heard. Where I taught, the voice was the ONLY thing we put weight on. Gotta pass that writing WASL...."must master 5 paragraph essay." Drones.

Whatan amzing weekend. How fortunate you were to paricipate. What perfect weather.