You and Me in the Shower 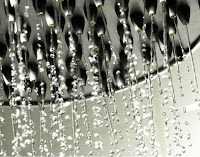 You think I kid? I don’t. Lately, (no not lately, ever since I’ve started blogging) I talk to you while I’m in the shower. Not out loud! But I have a blogging conversation with you. I come up with wonderful things to share (always hilarious and smart and inspirational). Really, I have blogged far more than has been seen here on Cuppa Jolie. Unfortunately, it’s all gone down the drain with the shampoo. 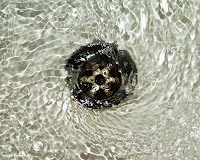 This makes the shower a dangerous place. It’s like a black hole for great ideas. Right? Hasn’t this same thing happened to you? Come on writers, back me up here. Haven’t you had the greatest idea, or a line comes to you while showering that you either forget or can’t get right once you’re out of the shower?
How about when you come up with the perfect sentence, I mean perrrfect. The kind that makes you rush to your computer, still dripping wet, towel piled on top of your head, bathrobe thrown on…typing…typing…typing…growling…groaning…because now, it’s gone. Hate that! It doesn’t come out in the brilliant way you thought it up in the shower. Either that, OR it seemed brilliant in the shower but once you get it down, it’s a little wah-wah-wah, not so great.

Someone needs to invent a waterproof tablet and pencil/pen that can hang in the shower to collect all the genius that comes about in there. The only problem with actually having such a tablet? The hot water might run out before we get the shampoo out of our hair.
And then there's the car...
Posted by Cuppa Jolie at 10:23 AM

Oh YES, I can so totally relate to this! I blog way more in my head in the shower than I do at the actual keyboard, and all my thoughts seem so much more profound while I'm in there. I despise that "Wah wah wah" feeling I so often get when examining my ideas under the glare of the bathroom lights afterwards. :(

Although your local scuba diving shop might be able to sell you or direct you to where you can get underwater writing tablets--I am almost certain I have seen underwater TV programs where this has been done--allow me to make an alternative suggestion: Maybe it is because I am from the Watergate Era, but couldn't you simply take whatever popular digital recording device business people use these days into the shower area with you to record your magic thoughts when they come to you? I mean you might have to place it in a baggy or some other waterproof container, hopefully one that will allow you to turn it on while keeping it safely away from water, but come on, writers are suppose to have imagination. Use your imagination. Where there is a will there is a way. Who knows, you might even have an idea you can patent, sell in volume to other writers, then retire and write fulltime. Okay, that's just my thought on the subject. Whining has always been more popular than divining solutions to conundrums.

More seriously, since I have always had this problem more often while at work in fast-paced, deadline moments, I do relate to your dilemma. As I was sometimes able to write down a great line or a thought, I did save things from time to time, but I think too often, it is all the little things surrounding an idea or expression, which is truly what we wish to save and translate for the reader and this is often lost because it cannot be recorded fully, even if sitting at a computer. It is more thought than words and a few words is all we have to put on paper. But, good luck.

That' so true! It's peculiar, but without warning the perfect words will just sound in your ears, the perfect scenes will flash through your mind, and you only wish you could record them instantly so you won't forget. However, you're already doing something else and it's noy like you can just abandon what you were doing. Another writer's curse.

Hey, just a sec ago I randomly started singing and came up with these terrific song lyrics, but I was watching Video on Trial at that moment...heh heh...so, ya, it sort o' slipped from my mind. If only I wrote them then instead of hearing Trevor Boris's funny yet mean comment about Miley Cyrus's video "Start All Over". If only....

ALL the time! My writing room is right next door to the bathroom and I am always running in to my desk in a towel or robe to write things down. Happens on the treadmill at the gym too, and I have to hold it in my head longer, til I get home and can write stuff down. Blog stuff, but also story stuff.

I had a feeling I'd have a few who'd speak up having had the same experience. Watch for a Part Two...coming soon.