(Did you think I forgot? I really didn't, but this late-business happens when you, meaning me, had too much fun with girlfriends over the weekend!)

Just like my last blog post, this one is coming to you from the sky! Gotta love that! (Okay, so it wasn't fully completed in the sky, but that, over to the right, is me writing this post last night on my Virgin America flight.)

Now, let me welcome my dear friends to Cuppa Jolie. Can you tell they speak my language? 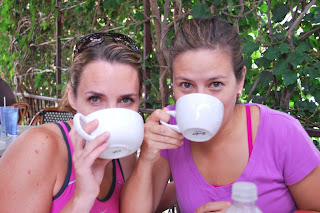 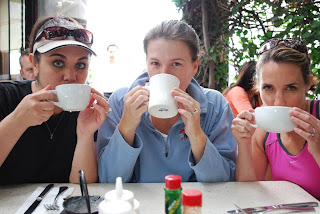 I'm flying back home from a weekend with girlfriends in CA. I shouldn't call these special people just girlfriends, they really are sisters (and not because we are sorority sisters, but because we have a special bond that's lasted--and will continue to--forever). Funny that none of us have a sister of our own! 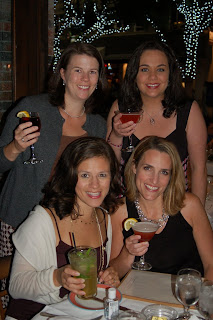 Since leaving college we have talked and talked and talked some more about how we need, no we MUST, have a girlfriend's weekend. And it finally happened, after THIS long. Yes, THAT long. Unbelievable.
Three of us flew into LAX, timing our landings so that we could meet up and grab a rental car together. That's where the fun and drama and the mix-ups and laughs began: getting into our Kia Rondo for a fun filled weekend. Because of the craziness that happened at that Hertz parking lot, the battle-cry of our weekend became "RONDO!" And we shouted it out many, many times. 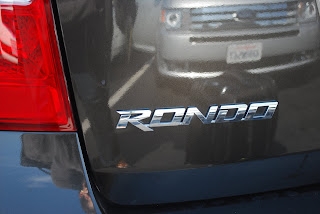 Haven't we all done the same with friends? Created a new term, one that only applies to you and yours, out of an experience or an event, that forever sticks. I can tell you, this one, I am certain, will last forever. (Right, sistahs?)

The official girlfriend week will forever be known as a rondovous...we hope to have many. 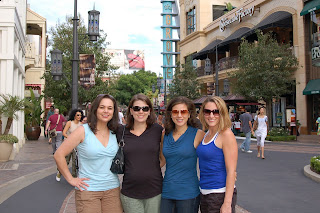 It was a weekend full of late-night chats. 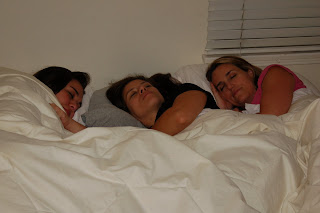 We didn't get much of the above...and if you can't tell, we weren't doing a very good job of getting shut eye (even when they were shut).

We spent most of our time in Santa Monica and had a lovely view from our hotel room. 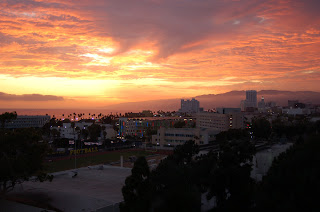 And it was all about girls! No men allowed. Seriously! 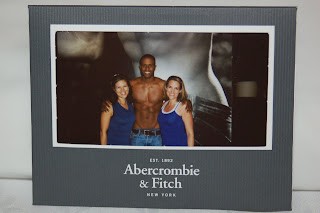 Okay, okay! That one snuck in on us. Actually, that was too funny. As we trolleyed through The Grove (Disneyland for the shopping inclined) something caught our eye in the Ambercrombie doorway. It was a did-we-just-see-what-we-thought-we-saw moment? So we further explored with the need to know: Was this how CA boys walked around The Grove? or Was this guy on exhibit? As we approached, I proceeded to show my grace by dropping my phone and shattering it about the concrete, but there he still was, right in the entry of the store. He was, in fact, on exhibit. Not only that, but there was someone taking Polaroids of him with silly women walking by trying not to giggle and stare at the model who was about ready to lose his trousers. (It's okay if you'd like to scroll back up for a second glance. Go ahead. I know you want to.)

Food! Oh, for the love of food....it was all an adventure and it featured lots of heirloom tomatoes. 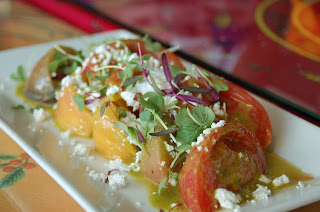 The above was our favorite of the weekend! Below, exhibit B. 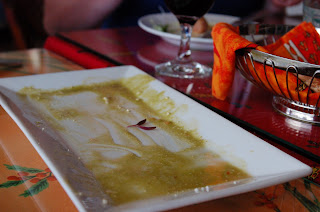 And breakfast at Cora's, well it was so blissful, it had to be experienced twice. 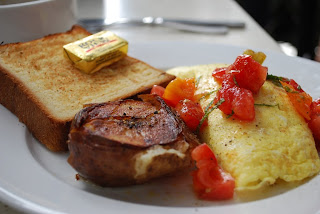 There was Border Grill...unique and wonderful. 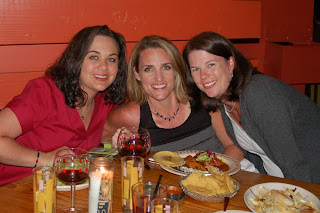 And, who can't use a trip to pinkberry? 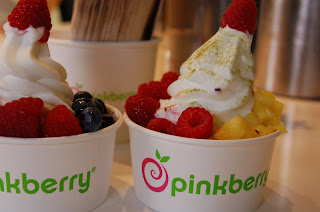 For girls who were ready to get our drink on, we didn't do such a good job. I guess we're just smarter these days. 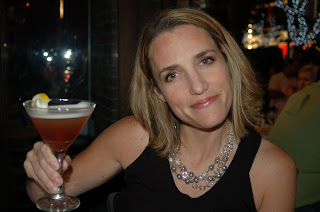 I probably had more of this kind of drink... (shocking, I know!) 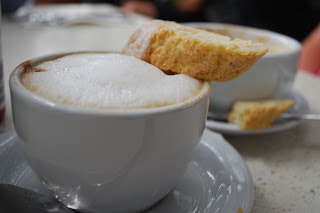 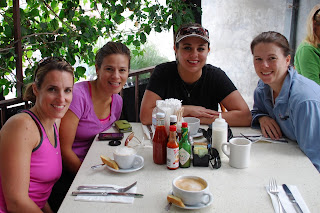 On Saturday, after coffee and breakfast we were ready to rock.
We spent about five hours on Venice Beach.
We had Nice Cream... 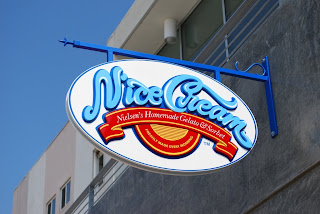 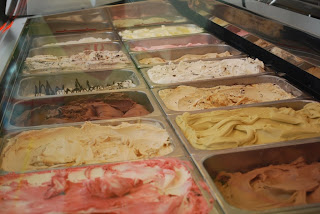 But if ice cream wasn't for you, the doctor was in... 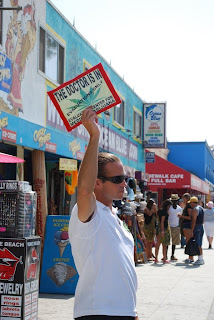 We passed that one by. 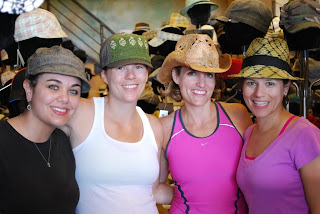 And I walked out with that cowboy hat on my head! Yee-haw.

The people watching was fun and interesting. I loved seeing Muscle Beach. There happened to be a squatting competition happening as we walked through. Then, out in the sand where there are rings, and bars, and ropes, watching the people workout was fascinating. There was even one guy doing full on work on the parallel bars, handstands and all. 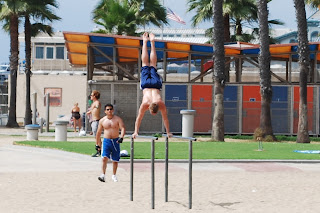 Of course, I had to give the rings a try. 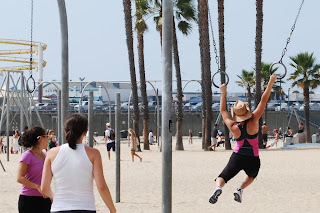 Wish I could say the hat helped. But man, those rings tore up my hands. I would also like to say I flew across, but that's as far as I got. Next time I'll bring my gloves.
Guess what my pits smelled like? 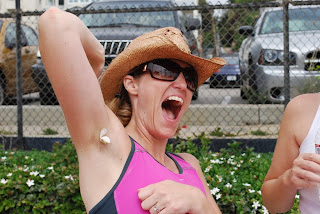 That's right! Gardenias. I sprout them there!

Unfortunately, we came back burned! The lines are ridiculous. 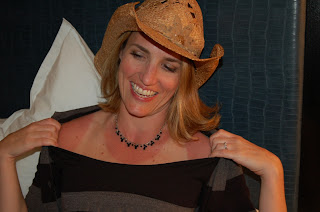 But most of all there was LAUGHTER. Lots of it. The kind that becomes dangerous to those who have had babies (which was all of us.) 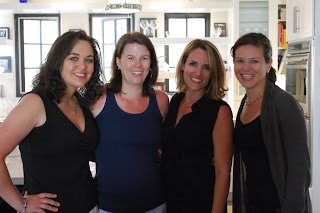 Now, onto your story! What special terms or slang does your character(s) have to describe something that only exists between friends/family?

I am only one thing...JEALOUS!! I wanted to be there!!
I wanted the coffee and the breakfast...even the sunburn!

OMG, I was LOL and it DID become too dangerous! This was a great summary of our wonderful weekend together and an even better Monday Moment. Thanks for posting!

Had to hop off my barstool to save the upholstery as I laughed reading this. I am jealous looking at this picture, and I WAS THERE! What an extraordinary gift we gave ourselves. Nothing more to say than... RRRRONDO!

What fun!
I love Venice Beach and Pinkberry's rocks. Girls weekends are great :)

My girls! My sisters. How great to have you here and commenting on Cuppa. I miss you already. Yesterday breakfast was boring and I didn't even have ONE cocktail or dangerous laughter (glad I could provide it for you though). The only thing I have left is sunburned shoulders (painful and ugly). RONDO! You're right, it was a gift. I hope there's a rondovous 2010.

Annie, my book sister! It was a lovely place to be, no lie. But you do NOT want the sunburn. :)

Sherrie, I waved to you as I flew over your house (I'm pretty sure I did). That was my first girlfriend weekend. It WILL NOT be my last.

OK, the armpit picture is too funny! Mine grow roses.

Girl, you can rock the cowboy hat! And how did I miss Pinkberry in August? Thanks for the highlights.