I've got a temporary case of OCD.
Okay, first let me say, I know Obsession Compulsive Disorder is nothing to joke about, so I apologize for any offense. 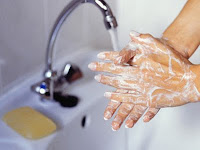 But I'm seriously OCD about germs at the moment. It started when I went to Santa Monica. You know, all that traveling, and sharing air with hundreds of strangers on the plane. There was a guy in front of us on the plane who kept sneezing, like explosive, awful achoos all over his Virgin America touch screen, which made me wonder who was touching (or sneezing on) my screen earlier. *shiver* We arrived to a friends house who's hubby was sick and so I started freaking out about germs; constantly washing, applying hand sanitizer, and attempting, really attempting, to not touch my face (that's hard when you're trying not to).
Now I have a sick hubby and snuffling kids. I feel bad, I really do, but I do not, DO NOT, want to get sick. So my poor hubby, I won't hardly get near him. And the girlies, well, I'm being very careful, because as much as you tell them to use a tissue and to sneeze into their elbow pit, well...you know. So there's lots of rubbing sanitizing wipes up and down railings, over doorknobs, anything else they touch, plus I'm slamming vitamins.

What's brought on this temporary OCD issue? Well, yeah, I really don't want to get sick (it's not fun), but I also have a Bodystep training coming up this weekend. I've paid my fee and I've been preparing. If I get sick, it's all for not. So obsess I do...
(And, yes! that is how much I will sweat over the weekend!)
I'll let you know if I make it. Oh, and hopefully they'll be a Monday Moment #39 next week, because if I do make it, I will be exhausted (the post may appear later in the day, fingers crossed).
What event happens or is about to happen in your character's life that makes them change their typical behavior or obsess?
Posted by Cuppa Jolie at 6:19 AM

That is a good question for my characters. Will have to think about that.

There is something going around here as well, and I have been doing everything I can to not get sick.

Wow---a writer and a bodystep instructor? I love bodypump and bodystep, when my knees agree with me.

Yat-Yee, always makes my day when the question is a good one for a writer friend to ask!

Amber...ah, thanks for the wow. I'm already a pump instructor (love it!). It is the yang to my writing yin.