Whoa! What a day we had yesterday.


We sailed over the Sound because dear friends, from out of state, were visiting and having a picnic get-together. But when you load a family of four into the minivan to venture across Puget Sound, you really want to make a day of it. I mean, the ferry boat crossing for the whole family is $45 alone. Phew!


The picnic wasn't happening until late afternoon, so we headed into the city with the girlies. We decided to go the Pacific Science Center which is located at the Seattle Center. We arrived around noon, as the sun started shining, and people were just starting to arrive at the Seattle Center. We could see that some sort of festival was getting started as we walked through the big, grassy, fountain area on our way to PSC. A massive rainbow banner tipped us off that it was Pridefest09.


We went about our business at the PSC exhibits, starting with Grossology, which was fun and gross and educational. We went through the many other exhibits, including the butterflies which are very cool. All super fun. But, before we knew it, it was time to go. 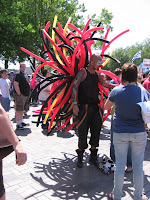 Once we left and ventured back out into the Seattle Center, the place was hopping--shoulder-to-shoulder kind of hopping. People were happy and decked out in lots of rainbow colors, some more bright and colorful than others. But once we were in the thick of it, things started to become more interesting. First there was the run in with, what my seven-year-old girlie dubbed, the butt shorts (meaning buttless). Probably a bit uncomfortable when you're eye level with the wearer's backside. As I tried steer one of the girls a bit to the side so her view was a little less cheeky, the view instead became breasts (and as the girls said, "with tape.") But, there were many really interesting costumes, too (like the one in this photo...sorry friends, no photo of the butt shorts).


So, my kids (like most 7 and 9 year olds) have not been exposed to "butt shorts" or pasties. But I have to say, they handled themselves very well, in a situation where I know they felt a bit embarrassed. And so did their mom and dad. I think I blushed a bit (more because I was with my kids than anything). But the mommy and daddy handle it well, too (I hope). As we walked through the crowd, we let them know it was a festival and that it was okay to dress (or more like not dress) as they were, that we all have butts and breasts. No biggie. Then once in the car, we told them a bit about Pridefest. But the interesting part was to hear them chat about it as we drove down the road, so matter of fact.


Anyway, it got me thinking about coming upon something unexpected (especially when that something might make one feel embarrassed or uncomfortable).


How about your main character? Can they identify with something (or someone) being unexpected? How do they react? And how does the adult(s) in their life react or handle the situation?
Posted by Cuppa Jolie at 7:00 AM

I think it's the eye-level view that has me gouging out my mind's eye. Whew!! Were Mom and Dad biting their cheeks to prevent the giggling??

Unfortunately, their view was a bit different than ours. Mom and Dad I think shared some what-do-we-do giggles (the real giggles came later when we could chat about it away from little ears).

It was actually the topic of conversation (between the girls) first thing this morning. Especially the "butt" shorts and how the only thing that was covered was the crack. Then they discussed whether the wearer was a boy or girl, and they both agreed that they didn't notice (they only noticed the butt). Too funny!

Great questions, Jolie! And even funnier how you *arrived* at those questions! ;-)

Who is this BJW guy? He is following me around posting right before I am going to post. Geez.