Hi, friends! I'm playing a wicked game of catch-up, and I have to say...I'm totally losing. I still have conference goodies I want to share with you and more, but until my kids have some clean underwear...you'll have to be patient.

That said, I will NOT miss a Monday Moment! So here it is:

Just before the SCBWI conference, my family road-tripped to Montana. We went to see family, as well as say a final goodbye to my father-in-law.
My father-in-law was a veteran, as well as a pilot, so the memorial was fitting from start to finish: twenty-one gun salute, the playing of taps, and his ashes being scattered from a plane over the Montana mountains.
My father-in-law's good friend, also a pilot, offered to take my husband up in his old war plane (how beautiful is the Sweet Mary Lou) to distribute hid dad's ashes. There was quite a scene at the airport, as this plane was something to see. Before my husband headed up onto the wing and into the cockpit, I hear Gene (the pilot) tell my husband that they would surely need to do a victory roll, which made my stomach do one of its own. Gene assured me he has spent more time upside down in planes that right side up. I'm not sure that made me feel any better. 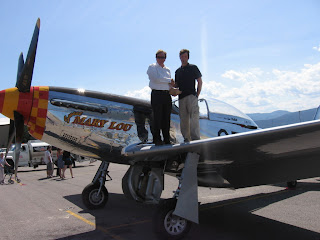 I, along with the rest of the family, watched on as Gene buckled Derek into his seat. Then, before he turned around get himself in, Gene turned to my husband and I heard him say, "Now, just in case we have to bail out..." Let me just say the explanation went on far longer than I could stomach so I stuck my fingers in my ears and sang the la-la song.
All that said, I was excited for Derek to have this experience and the chance to honor his dad in this way. And I thought he looked pretty Top-Gun handsome in there. 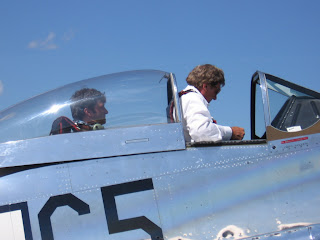 As the plane headed for the runway, an airport official escorted us out so that we could watch the take-off and landing. When we reached our viewing spot I heard what I thought was two backfires and I said so to Derek's uncle. We both gave each other a bit of a concerned look and then notice the plane's propeller was slowing, followed by an emergency vehicle raising with lights flashing to the plane. Uh, yeah! Not good.
Now, I knew they weren't in danger, but I knew that whatever was going on wasn't a good sign. Sure enough, that was the case. A brand new back tire had popped. Strange, I know. There was no going up that day and we were leaving first thing the next morning.

Disappointment. Big time.
But such things happen. There are big events in our lives and suddenly something intervenes and those big events can get squashed or changed or ruined.
How about for your character, do they ever experience a change in plans that results in disappointment?
Posted by Cuppa Jolie at 12:28 PM

when you have your heart set on one thing and a certain outcome, it is devastating when things turn out differently. but in reading your story, i found it totally amazing that they even got as far as they did. that experience alone, without even leaving the ground, is beautiful in its connection to the man you were all honoring by your presence.

man who cares about my character.

i need to talk about you - did you just have a heartattack when you heard that Thank goodness they were on the ground. whew!

I would so be making my husband put on a parachute just in case. Phew! As for writing, disappointment is often overlooked. We generally focus on overcoming the situation and forget that perhaps the character might need to be disappointed for a chapter, creating yet another situation.

Goodness ... what an experience! My palms were sweating for you and your hubby!

Thanks for the comments, everyone.

Shelli - believe it or not, I was pretty calm. After I got over the thought of the barrel roll, I was excited for Derek. You know, how many people get that opportunity. And when I heard the pops (what I thought was a backfire) I sort of shoved it out of my mind, knowing the pilot would never go up if things weren't all right. Then there was part of me that thought there was no way anything bad could happen, that my husband's family had been through too much already (Derek lost his sister two months before his dad...it's been a tough '09). But, I can say, I was so thankful they didn't land on that tire. But mostly I felt disappointment that he didn't get to go up.